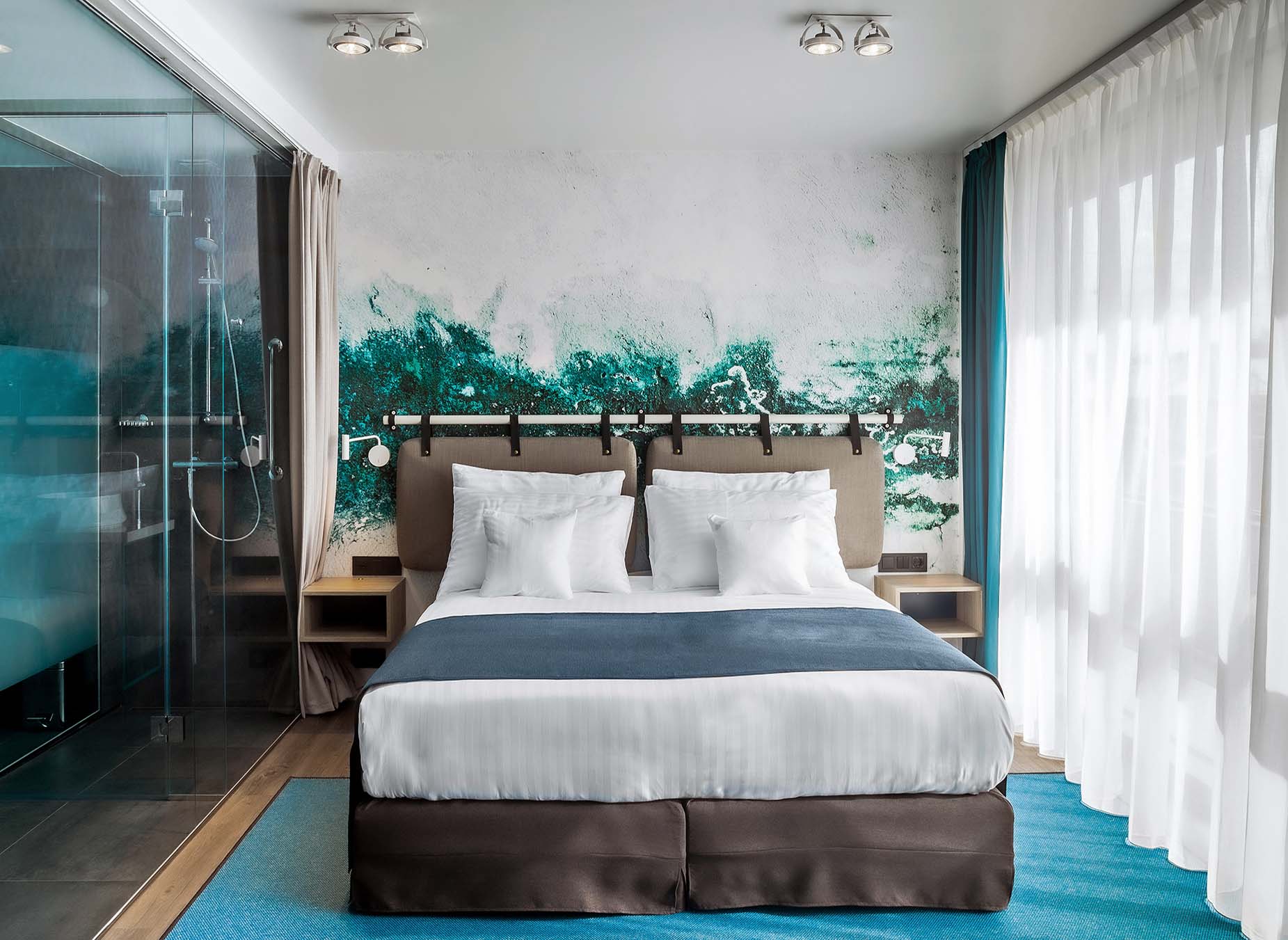 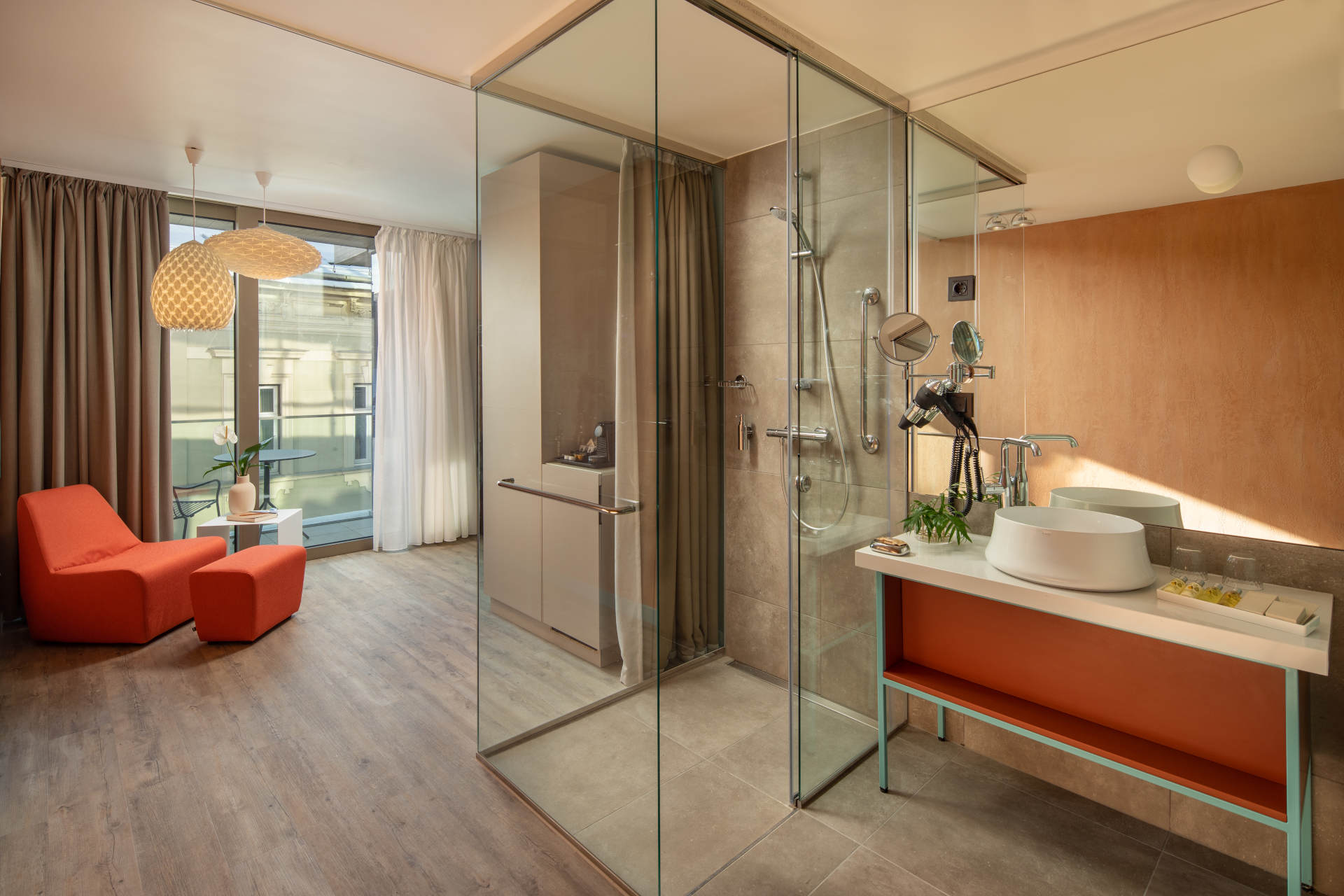 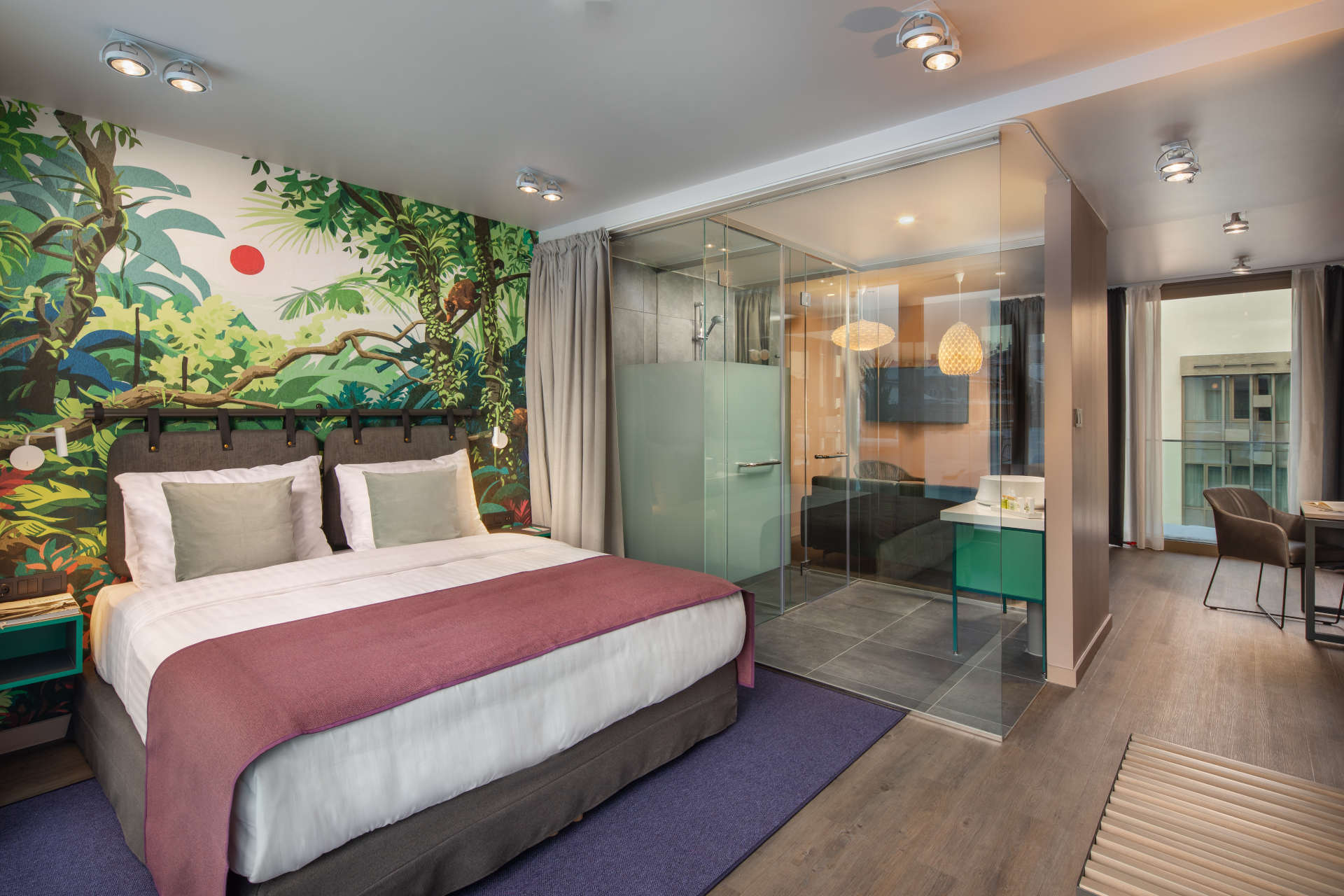 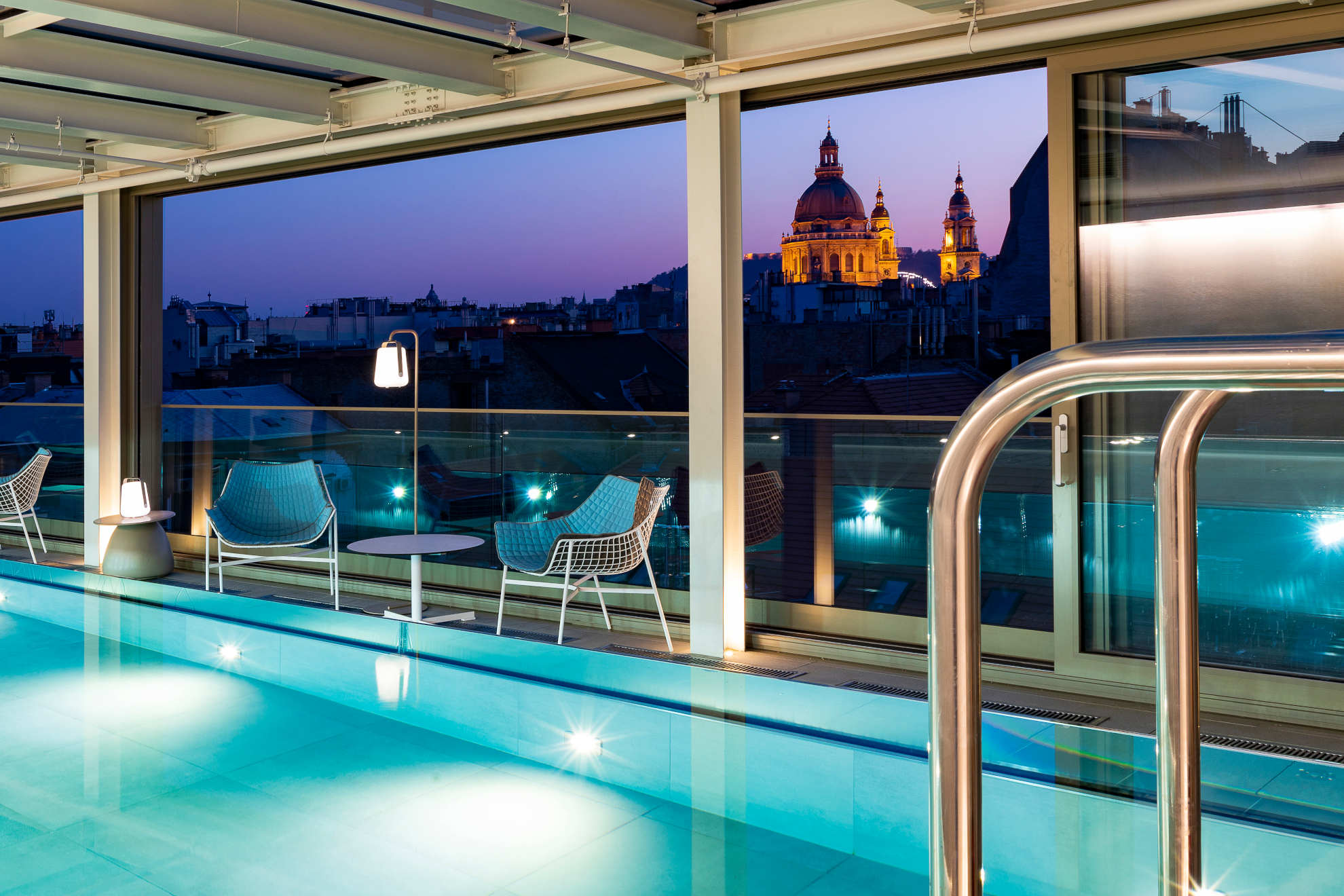 Get the most out of Budapest! Cortile Budapest Hotel puts you right into the heart of the city. This very recent boutique hotel is the perfect choice for a tranquil urban escape. Feel the smell of novelty and fresh flowers scattered around the tropical greenery hall. Meet our cheerful staff, who are ready to provide great personal service, 24/7. Relax in one of the lavishly designed, soundproofed, spacious rooms. Live the moment to the fullest by enjoying the roof-top pool, by the sparkling lights of Budapest. 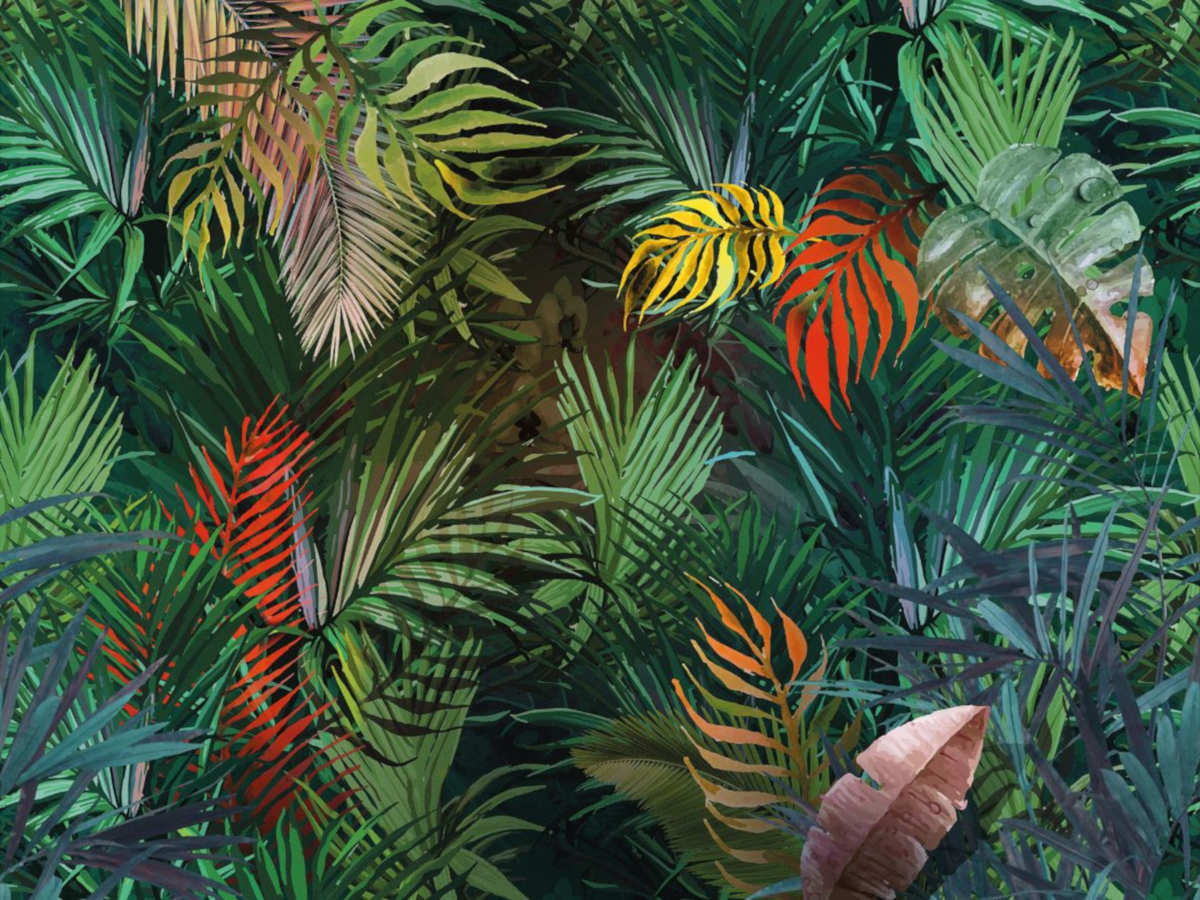 As an eco-friendly hotel in Budapest, we aim to have as little impact on the environment as possible, making good use of resources, recycling waste conscientiously, using geothermal and other energy resources carefully and ensuring that our staff understand the importance of being eco-friendly.
LEARN MORE

ABOVE THE ROOFS OF BUDAPEST

Swim on the top of Budapest. Chill out on the sun lounger. Have a romantic evening or watch the sun rise over the city. Watch Budapest sparkle, almost like by magic. Get the most out of your stay! 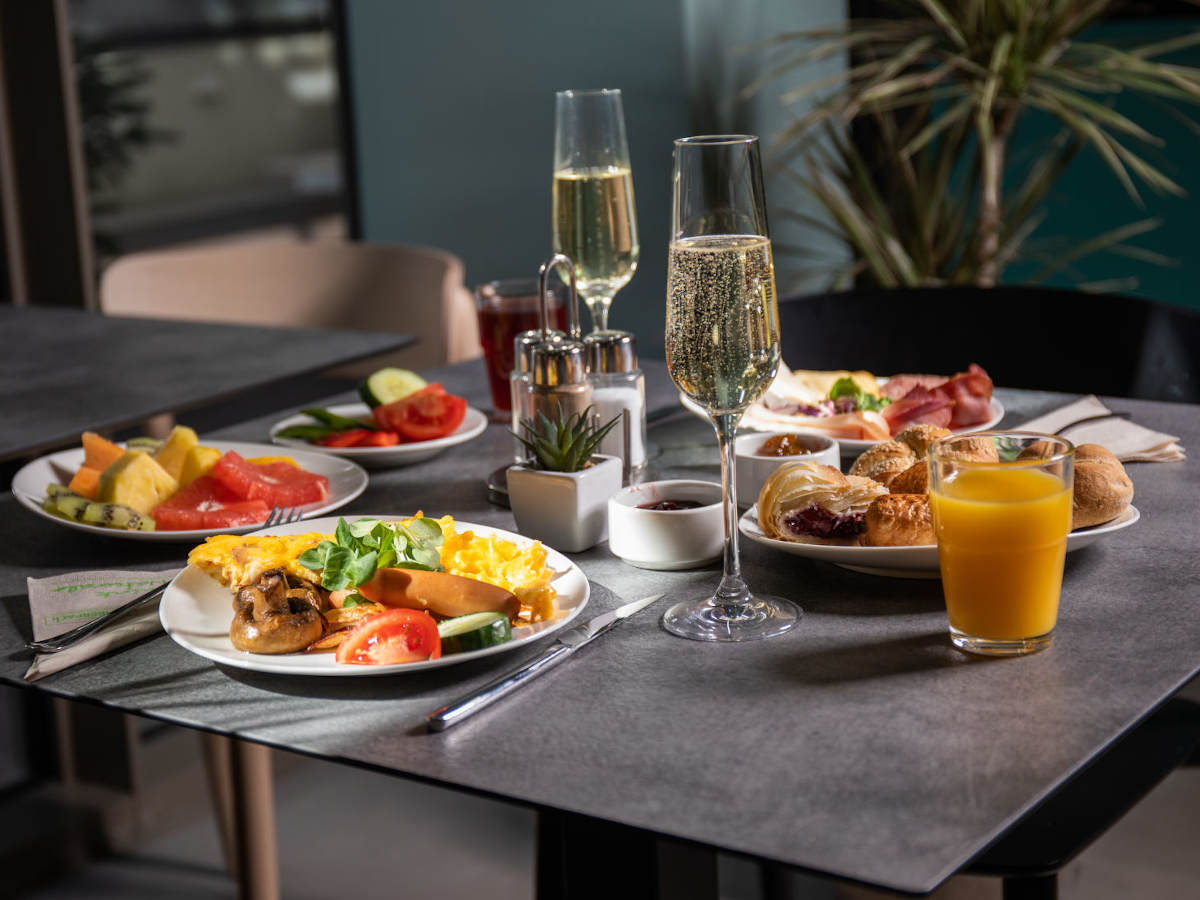 You can scroll by dragging your finger along the map. 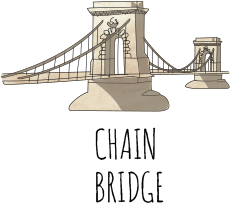 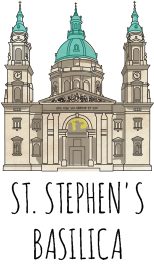 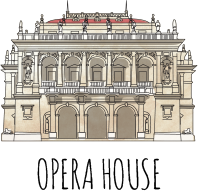 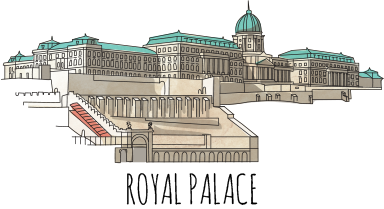 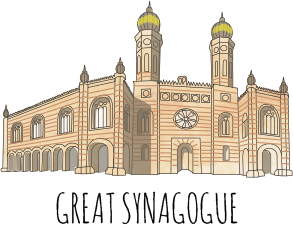 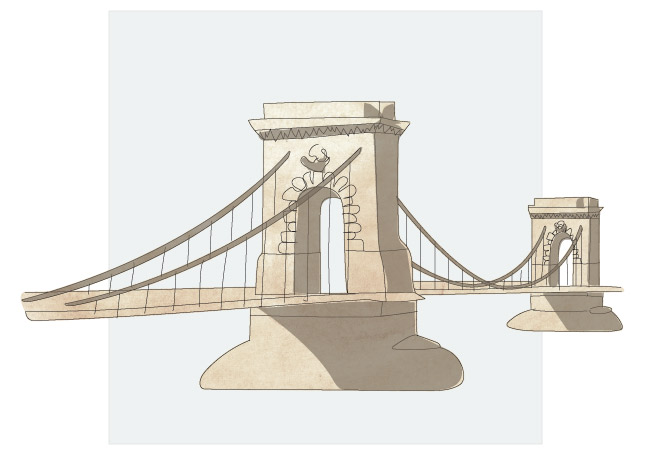 Parliament >
Designed by the English engineer William Tierney Clark and built by the Scottish engineer Adam Clark, it was the first permanent bridge across the Danube in Hungary. It was opened in 1849.

It became a symbol of advancement, national awakening, and the forging of links between East and West.

The bridge is featured in the films  I Spy, Au Pair, Walking with the Enemy and Spy. It can also be seen at the beginning of Katy Perry’s music video for “Firework”. 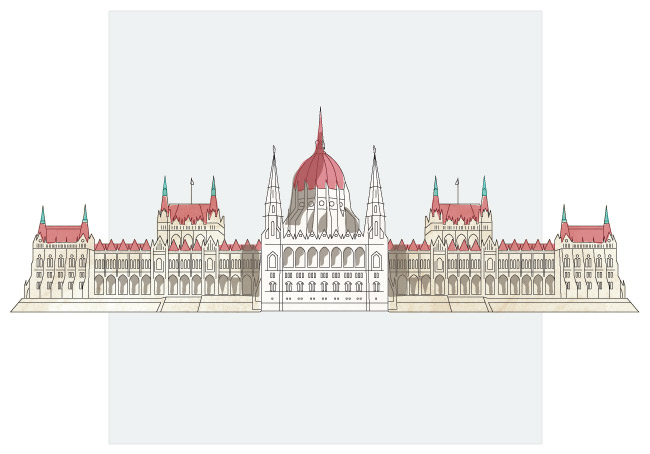 < Chain Bridge
St. Stephen's Basilica >
Built in the Gothic Revival style as the largest building of the country, the Parliament was inaugurated on the 1000th anniversary of the country in 1896. It was completed in 1904.

About 100 000 people were involved in construction, during which 40 million bricks, half a million precious stones and 40 kilograms (88 lb) of gold were used.

One of the famous parts of the building is the hexadecagonal (sixteen-sided) central hall, with huge chambers adjoining it: the Lower House and the Upper House. The Holy Crown of Hungary, which is also depicted in the coat of arms of Hungary, has been displayed here since 2000.

< Parliament
Opera House >
The third largest church in Hungary, the Roman Catholic basilica in Budapest was completed in 1905 after 54 years of construction. It is named in honour of Stephen, the first King of Hungary (c. 975–1038), and right hand housed in the reliquary is supposedly his.

The basilica is the same height as the Hungarian Parliament Building, and together these are the two tallest buildings in Budapest at 96 metres (315 ft) – this equality symbolises that worldly and spiritual thinking have the same importance.

The two towers have six bells altogether, including the Szent István bell, which is the biggest bell in Hungary at 9250 kilograms and a diameter of 252 centimetres. 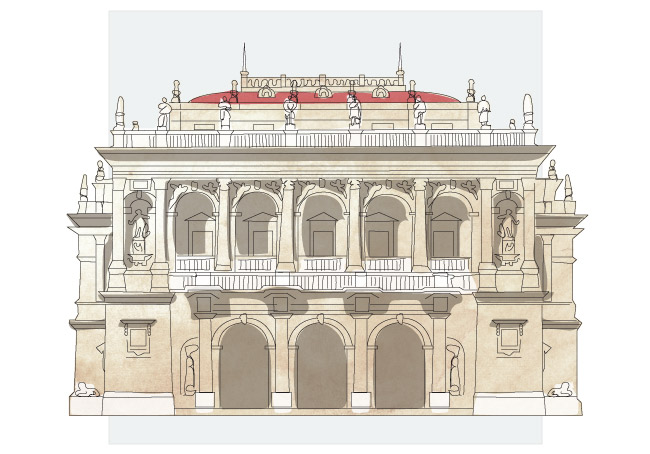 < St. Stephen's Basilica
Royal Palace >
Built in neo-Renaissance style, with elements of Baroque, construction began in 1875, funded by the city of Budapest and by Emperor Franz Joseph I of Austria-Hungary, and the new house opened to the public on 27 September 1884.

Many important artists performed here including the composer Gustav Mahler, who was director in Budapest from 1888 to 1891 and Otto Klemperer, who was music director for three years from 1947 to 1950. 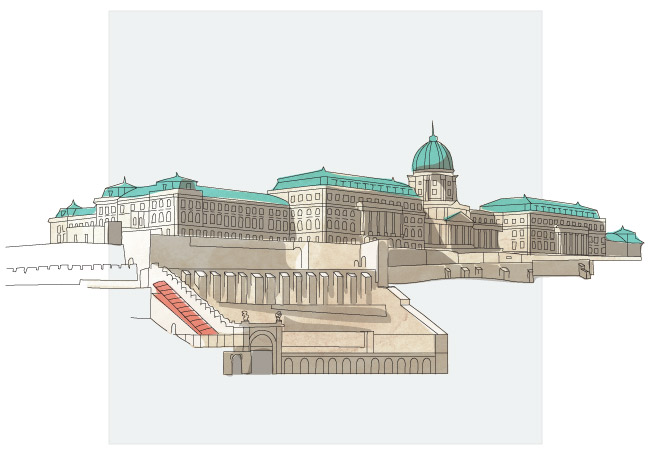 < Opera House
Great Synagogue >
The Buda Castle is the historical castle and palace complex of the Hungarian kings in Budapest. It was first completed in 1265, but the massive Baroque palace today occupying most of the site was built between 1749 and 1769.

After the Austro-Hungarian Compromise of 1867, Emperor Franz Joseph and Empress Elisabeth (Sissy) were crowned king and queen of Hungary. The palace played an important part in the lavish ceremony and was a symbol of peace between the dynasty and the nation. 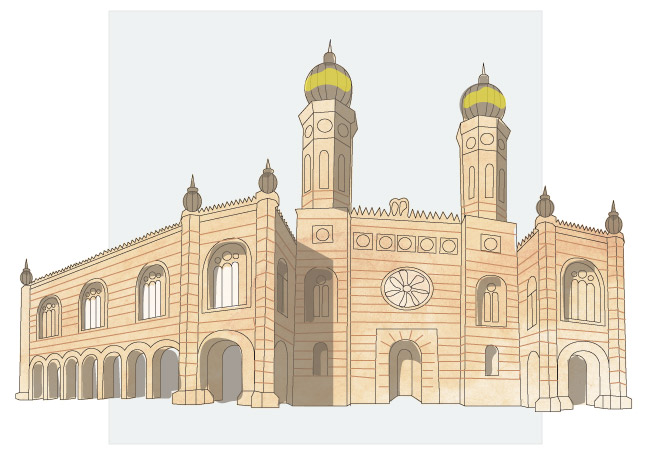 < Royal Palace
Heroes Square >
The largest synagogue in Europe and the second largest in the world. It seats 3,000 people and is a centre of Neolog Judaism.

The synagogue was built between 1854 and 1859 in the Moorish Revival style, with the decoration based chiefly on Islamic models from North Africa and medieval Spain (the Alhambra).

The Dohány Street Synagogue complex consists of the Great Synagogue, the Heroes’ Temple, the graveyard, the Memorial and the Jewish Museum, which was built on the site formerly occupied by the house where Theodor Herzl’s was born. Dohány Street itself, a leafy street in the city center, carries strong Holocaust connotations as it constituted the border of the Budapest Ghetto.

< Great Synagogue
Heroes’ Square is one of the major squares in Budapest, Hungary, noted for its iconic statue complex featuring the seven chieftains of the Magyars and other important Hungarian national leaders, as well as the Tomb of the Unknown Soldier. The square lies at the outbound end of Andrássy Avenue next to City Park (Városliget). It hosts the Museum of Fine Arts (Szépművészeti Múzeum) and the Gallery of Art (Műcsarnok).

The central feature of Heroes’ Square, as well as being a Budapest landmark, is the Millennium Memorial (Hungarian: Millenáriumi Emlékmű, also translated as Millennium Monument or Millennial Monument). Construction began in 1896 to commemorate the thousandth anniversary of the Hungarian conquest of the Carpathian Basin and the foundation of the Hungarian state in 896. 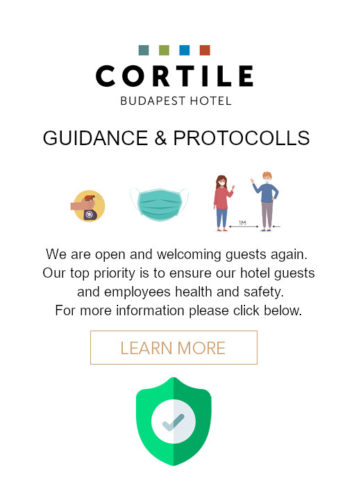